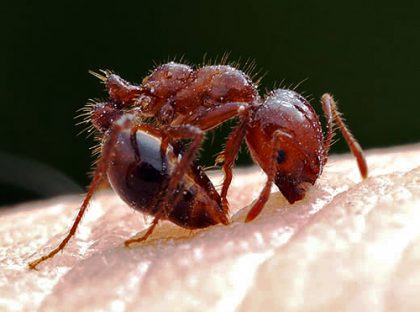 Fire ants are an invasive species and their painful bites can injure or kill livestock, wildlife, domestic animals, and humans. Their large mounds  are unsightly and often damage mowers and other equipment.  Read on to get rid of fire ants naturally…

To find the best treatment and get rid of your ants, first you must identify the ant you have a problem with.

Fire ants are dark reddish-brown with shiny black abdomens, also worker fire ants are about 1/16- to about 1/4-inch long. Fire ants are similar in appearance to many other ants, thus you should make sure you have correctly identified them before attempting to solve your ant problem. If you are uncertain about the species, call your local extension office.

There are hundreds of ant species in the southern United States, including some native fire ant species, and most of them are considered beneficial insects. Workers and eggs surround a fire ant queen. Fire ants will build their mounds almost anywhere, such as next to a building, tree, sidewalk or electrical box. A fire ant mound does not have a central opening. Fire ants emerge quickly and begin biting and stinging when the mound is disturbed. They will even run up vertical surfaces.

Most people try to control fire ants by treating individual mounds, however mound treatments are expensive, and require lots of time and labor if you have large areas to treat.

To be effective, the mound treatment must kill the queen(s). Otherwise, the colony will survive. Some nests may go undetected. Even an area where every mound has been treated can soon be re-infested by fire ant colonies migrating from untreated areas or floating there on flood water.

Talk to your lawn care service provider to get the best solution for your yard and grass types.

You can find fire ant insecticide at a local lawn and garden store if you want to avoid the organic method. You can easily use too much insecticide, which may lead to environmental contamination if rain washes the insecticide into lakes and streams.