It’s yellow and black; it buzzed through your picnic and stirred everyone up. Was it a bee, or was it a wasp?

The difference is not only significant to those unfortunate few who are allergic.

The difference is essential to anyone who eats blueberries, cranberries, eggplant, tomatoes, and anything else from a commercial farm, which is most things in a grocery store.

Check out one of our other articles titled, “10 Plants that Attract Beneficial Bugs.” 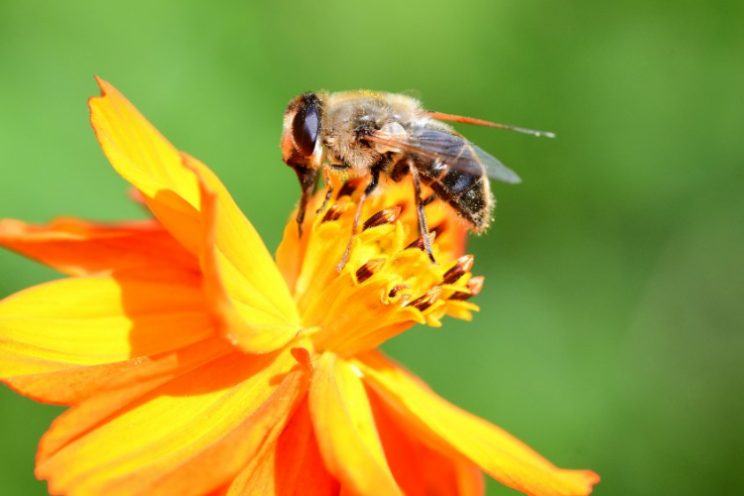 Bees come in all shapes and sizes. Still, a few very distinct characteristics set them apart from wasps and other flying insects.

Honey Bee, for example, is our champion pollinator. The barbed stinger can most easily identify them on the end of their body.

Honey bee colonies consist of 1 queen, hundreds of drone bees(males), and up to 40,000 female worker bees, the Queen’s sisters!

Bumble bees are a little easier to spot, fat, and covered in hair. They make up 47 different species of bees in the US and 250 worldwide. Bumble bees live in smaller colonies than honey bees.

The Queen will mate in the fall and then retreat underground to hibernate until Spring. Once Spring comes around, the Queen emerges and begins to forage for food for her first round of offspring.

Then, her daughters will take over foraging and begin the work around the Queen as she continues laying eggs. The colony grows rapidly but will eventually mostly dies off by wintertime.

These furry pollinators are almost exclusively responsible for the blueberries, cranberries, eggplant, and tomatoes we enjoy today. Unfortunately, microbial pathogens have seen at least four species in the US rapidly decline in recent years.

One of nature’s rare creations is the Cuckoo Bee, which makes up about 10% of the world’s 20,000 bee species. And yes, this bee’s behavior is bizarre, but it’s not crazy or deranged like the name suggests.

However, this bee tends to look more like a wasp, with its extra thick exoskeleton and long stinger. It gets its name from its strange behavior when it lays eggs.

The Cuckoo will find a beehive, wait until all or most of the bees have gone out to forage for food and resources, sneak inside, and lay its eggs among the Queen of that hive’s eggs. Then it just leaves, forcing the other species of bee to raise and care for its young! How bizarre! 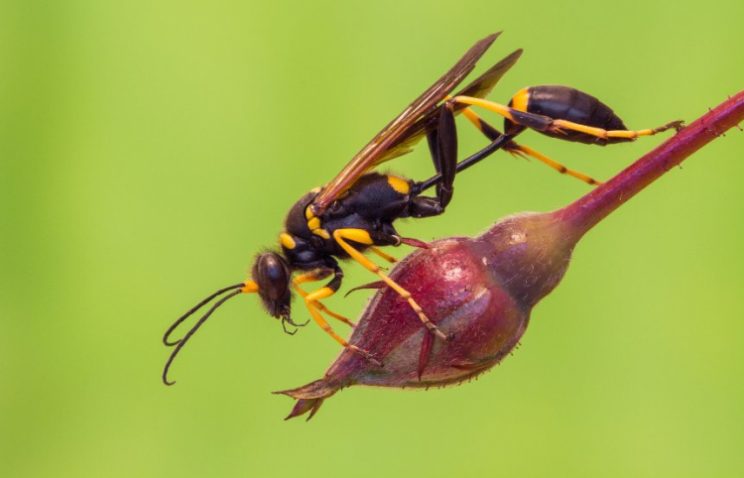 Wasps are important predators of certain pest insects. However, they can be very aggressive and dangerous, especially if you’ve accidentally wandered too close to their colony.

If their nest is above ground, it will be a mud or paper hive, distinct from a bee’s hive. Wasps mostly nest underground, but it’s not uncommon to see their nests hanging from a tree or on the side of a house. If you happen to see a nest, steer clear and let the experts handle this one, they can contain up to 5,0000 wasps in one colony!

(maybe these directions need to be a break out as well?)

One way to deal with these necessary predators is to take an old 2-liter cola bottle and make a trap. Inside the empty bottle, mix up 1/4 cup of sugar, 1 cup vinegar, and 1/2 cup of water, shake that up well to xix it and then add a banana peel. Cut about 3/4 in holes near the top using a knife, and then fill the bottle with water.

Set this out near the nest, not too near, or somewhere far from where they’ve been ruining your outdoor activities. Don’t worry; this mixture isn’t sweet enough to attract bees. Once the trap is complete, you can retrieve it and throw it away.

It is hard to tell between these two very different and essential insects.

If you pause for a brief moment or keep your wits about you and cannot panic when you encounter a flying, black and yellow insect, you’ll be able to spot these fundamental differences.

Bees are usually round and hairy, while wasps are slender and don’t have any hair on their bodies. This is because bees use their hair to collect pollen.

If that’s the case, your first encounter with a bee will usually be the warning shot that wasps certainly don’t give off. The first bee will likely fly straight into your head and bounce off. Since they lose their stinger and die after, most bees try to avoid having to sting anything.

Have you ever wondered if vinegar repels bugs?  Read our article and find out.

If someone is allergic to a bee sting, it’s vital to get them to some medical facility quickly. The person will usually become nauseous or begin vomiting and have trouble breathing; getting them somewhere to be treated within an hour of being stung is crucial.

Their life could depend upon it! This is why most people with this allergy carry epipens. Don’t rely on this, though. Allergies change, and someone could not know they are allergic if they’ve never been stung or had allergy testing done.

Excited about all the information you learned about bees vs wasps?  Want to learn more about other insects?  Read this article next, “Prevent Mosquitoes in Your Yard.”

0 comments on “Bees vs Wasps”Add yours →